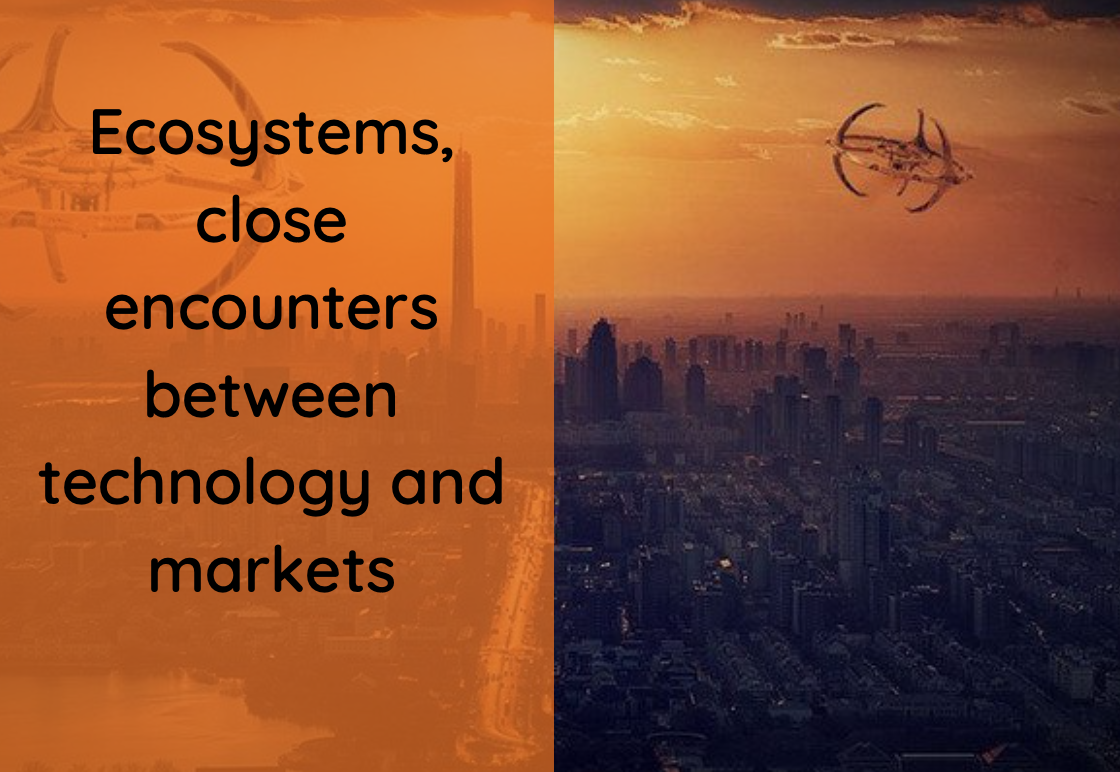 The disruption of Business

We’re talking here about the disruption of “markets”; not just of one market, but about the mere concept of markets: technological progress and adoption, combined with higher customer expectations and increased focus on customer journey, are leading to the emergence of a new type of model for the global economy: Ecosystems. This is probably one of the most fundamental and impactful evolution in business for the years to come, because it will redefine completely the way companies create and capture value.

Ecosystems can be defined as customer-centric networks, via which interconnected businesses can supply various products or services along the customer journey. This new type of model, which according to McKinsey could represent 1/3 of the global GDP by 2025, is driven by 2 main trends:

The best know examples of ecosystems are the ones created by Apple, Google, Amazon, Alibaba, Baidu, Tencent and alike; those companies have actually built, and are orchestrating several ecosystems simultaneously, each addressing specific customer journeys.

There are many more of course: upcoming tech firms for instance, like Xiaomi, Didi Chuxing, ByteDance, or Meituan are forging their own ecosystems in respective fields of smart hardware, mobility, content, and O2O (Online 2 Offline). McKinsey have identified 12 ecosystems that will frame this evolution moving forward: 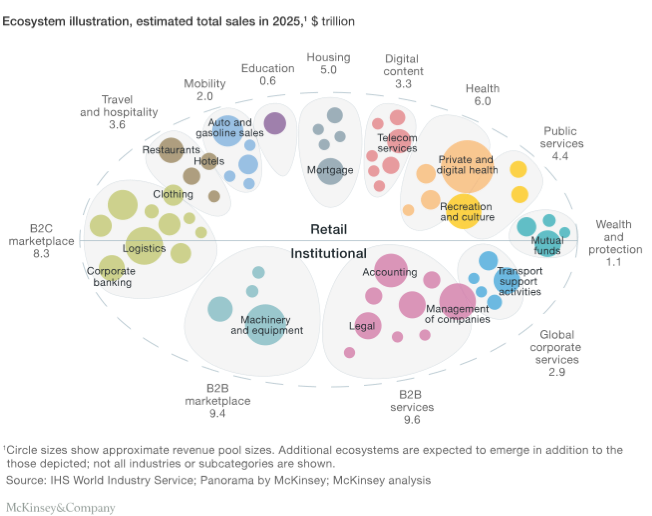 Their borders are blurred, and at the heart of those ecosystems are technological platforms – systems that make integration easy – layered with platform business models. The big players master both the technological architecture, those new business models, and the network – and data network – effects, that are essential to success. Ecosystems are broader than sectors, and are also more dynamic because they will emerge around the basic needs of individuals or organizations. Explicit needs, but also implicit needs: as Steve Jobs said, “People don’t know what they want until you show it to them. Our task is to read things that are not yet on the page.” And working on the following approach will for sure help identify those hidden needs.

Practically, what does this mean?

Ecosystems are easily understood when looking at what should be the starting point of everything: the customer journey. We’re moving away from “customer touch points” to take a much more natural or ergonomic approach with “journeys” that humans have to get through, to satisfy their needs: here is the example that McKinsey is highlighting with the purchasing of a car: 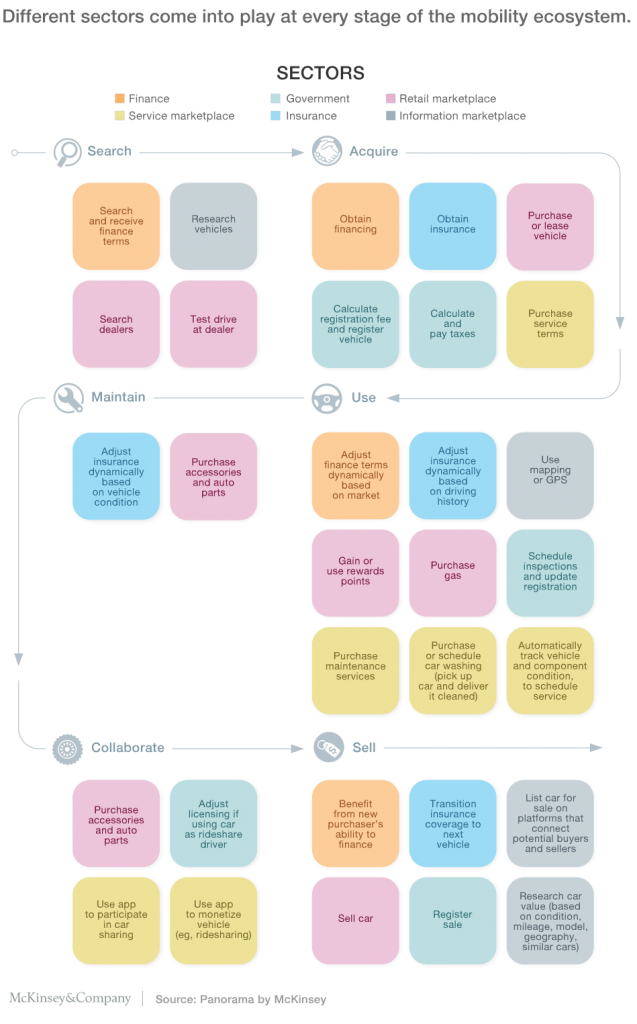 As a result of this evolution, companies are having to review their positions to meet those new customer expectations. And that means that they are faced with a binary choice: orchestrate an ecosystem and build & operate its platform, or join into an existing one; both avenues are valid, but they are fundamental differences that need to be put on the table before making that choice. First of all, the company’s leadership has to decide what role they want to play in the customer journey: do they want to own it because it’s core to their business? do they want to contribute in several ecosystems to hedge their bets? Do they want to create or join a whole new ecosystem to innovate? Etc..

In the world of platforms and ecosystems, there are some interesting cultural differences too: in an interview with Technode, William Bao Bean, Managing Director of Chinaccelerator, was saying: “US and European internet companies usually focus on one sector and try to be the best at it. Chinese companies, however, start by focusing and solving one problem, but over time they start to attack all the problems.” Indeed, while in the U.S. and Europe, different services are generally offered via different apps for iPhone and Android users -with some level of integration-, it is a whole different kettle of fish in China and Southeast Asia, where the so-called “super-apps” open the door for big changes to how people live and do business: they indeed offer the ability to communicate, shop online, order rides, read books, play games, get food delivery and pay for anything within a single, unified smartphone app; and this is how Asia is defining innovation today, according to Yoolim Lee from Bloomberg. The superstar of super-apps being Wechat, which manages to drain more than 1Billion users a month. Those super-apps serve as anchors to drive user engagement, and by securing the customer interface, ecosystem players skim most of the traditional value chain. Whether super-apps would find their place in western countries is another debate.

Let’s finish with the example of Ping An from China. When you contract an insurance, you do it because you have to, and you hope never to need it; and let’s be honest, the insurance also hopes never to hear from you again. Which means that this industry has a low level of customer interaction, and therefore a low level of customer emotional engagement, and a high level of volatility. 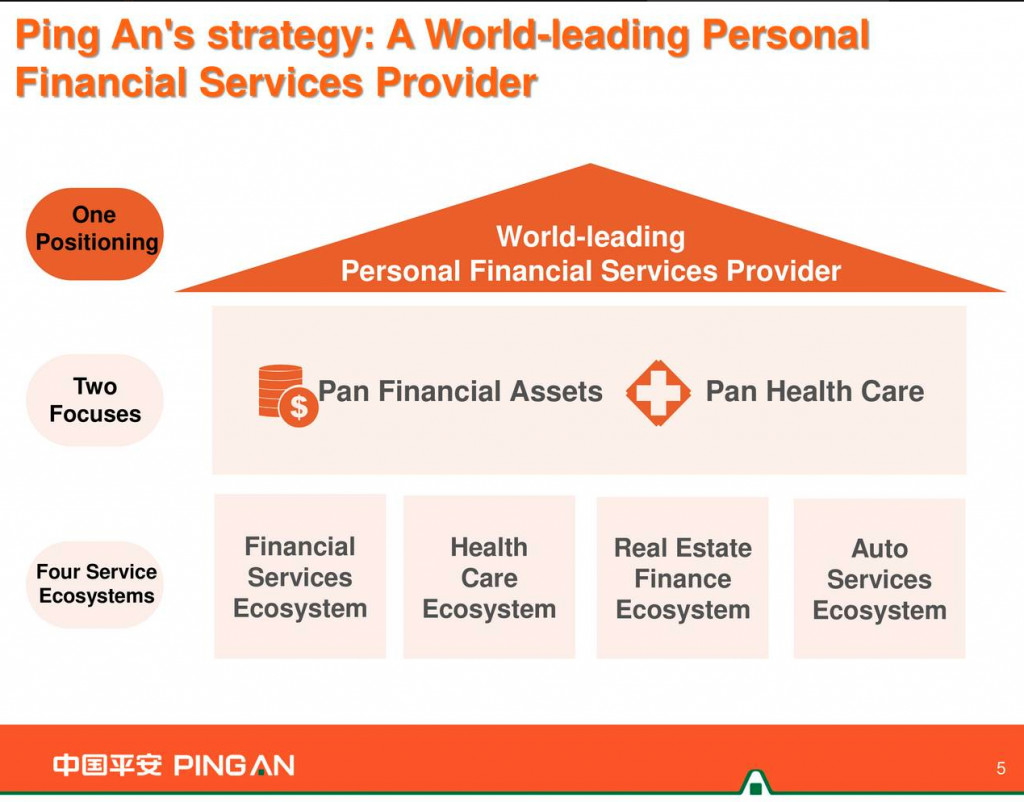 With regards to ecosystems, the chinese Ping An is one remarkable exception, in that they have decided not to be a participant of ecosystems, but rather the orchestrator of several: thanks to their strategy leaning on 4 ecosystems, the company is touching 350 millions users daily, and upsold 160 millions contracts. To that end, they created technological platforms integrated into one single account: Good Doctor for Health, Lufax and OneConnect for Finance, Pinganfang for Property Management , and acquired Autohome. The chart below illustrates the staggering reach of those apps and ecosystems within a couple of years. Thanks to their orchestration role, they are bringing together services from different participants on one platform, thereby fulfilling customer needs along their journey, and adding new products and services when they stumble across a hidden need. Not only are they selling more policies, but they are also able to better assess risk, enrich their customers’ engagement, improve the customer experience through a smooth journey, and increase the emotional link with the brand. Resulting in extremely high returns. 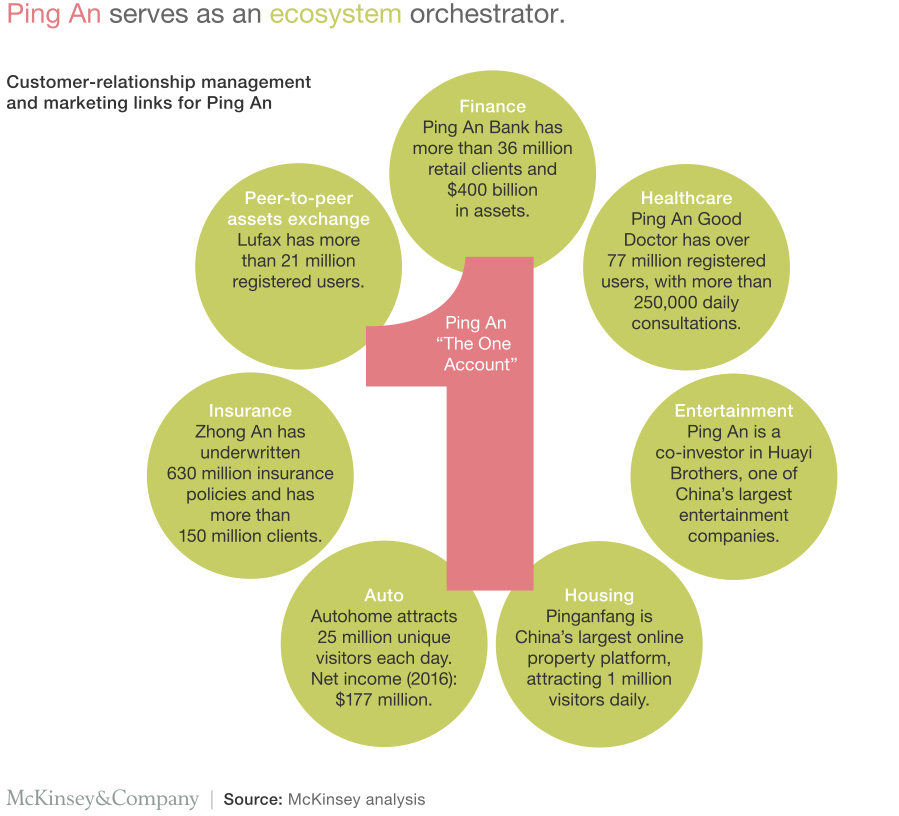 But as I mentioned in another article of the “Platform El Dorado”, creating and orchestrating a platform is complicated and risky, and only a few will succeed. Consider the following prerequisites: technology excellence, direct customer connections, data access and analytics capabilities, business model adaptability, and flexible partnerships models.

And make a decision.

If you don’t, chances are, your competitors will.

More about ecosystems? click here to read the example with Apple.

GET THE LATEST INSIGHTS DELIVERED TO YOUR INBOX

Don’t miss the new analyses of our experts.